The God Helmet has been the subject of many laboratory studies. This page offers links to a few of the research publications (in no particular order). There are many more than are listed here.  They’re not easy reading, but they’re the basis for the science supporting the God Helmet.

One of the leading papers:
“Experimental Simulation of the God Experience”

This is one of the most important review papers, which goes over Dr. Persinger’s theories and experiments concerning the experience of God, the “sensed presence”, the self and the early history of his work in the area.  It’s based on the observation that all experiences are correlated with (or generated by) activity in the brain.

1) The Neuropsychiatry of Paranormal Experiences
This review paper describes Persinger’s theory of paranormal experiences, including a section on experiences of God, as well as describing the procedure used to elicit them.

“From the perspective of modern neuroscience all behaviors and all experiences are created by the dynamic matrix of chemical and electromagnetic events within the human brain. Paranormal experiences might be considered a subset of these neurogenic processes.”

2) Report of an independent replication of one the God Helmet experiments. (link opens in a new window).

3) Neurobehavioral and neurometabolic (SPECT) correlates of paranormal information: involvement of the right hemisphere and its sensitivity to weak complex magnetic fields.
The paper describes experimental results with a psychic in Persinger’s laboratory.

“Sensed presences (subjectively localized to his left side) were evoked when weak, magnetic fields, whose temporal structure simulated long-term potentiation in the hippocampus, were applied over his right temporoparietal lobes.”

4) Putative perception of rotating permanent magnetic fields following ingestion of LSD.
The paper describes how subjects who took LSD had their experiences enhanced by application of magnetic fields that rotated at the same speed (0.5 Hz) later used in the Koren Helmet experiments.

“3 participants who had ingested psychotropic concentrations of lysergic acid diethylamide (LSD) reported diffuse blobs of white, purplish, or greenish-yellow lights as two horseshoe magnets rotated at 0.5 Hz. The experiences were not reported when the magnets were stationary or removed from the apparatus.”

5) Experimental simulation of a haunt experience and elicitation of paroxysmal electroencephalographic activity by transcerebral complex magnetic fields: induction of a synthetic “ghost”?
The paper describes how a subject, with a history of ghost-like apparitions, had an experience very much like his previous visitations, re-created for him in the laboratory.

“Within 10 min. after exposure to a frequency-modulated pattern applied over the right hemisphere, the man reported “rushes of fear” that culminated in the experience of an apparition. … A second magnetic field pattern, applied bilaterally through the brain, was associated with pleasant experiences.”

“Quantitative bipolar electroencephalographic measurements over the occipital, prefrontal, and temporal regions showed increased power within the 16-Hz to 18-Hz range 6 wk. after termination of treatment for those 7 patients who received the burst-firing magnetic fields bilaterally over the temporal lobes but not over the left prefrontal region.”

The paper describes an experiment to determine if the color of ambient light could influence the effects of the Koren Helmet.

“Subjects exposed to the magnetic field reported significantly more visual sensations along the left side in red light and along the right side in green light.”

8) “Experimental induction of the ‘sensed presence‘ in normal subjects and an exceptional subject.”

The paper describes an experiment that included an individual psychic, and was done to test the idea that the “sensed presence” experience is an example of a larger phenomenon that includes spirits, angels and other entities.

“Numbers of button presses (done when subjects were sensing a presence) associated with the experiences of a mystical presence, to whom the subject attributed his capacity, increased when the complex magnetic fields were applied without the subject’s knowledge.”

9) Validating New Technologies to Treat Depression, Pain and the Feeling of Sentient Beings: A Reply to “Neuroscience for the Soul” (Full text – Opens in a new Window)

This paper replies to some misunderstandings and online errors about the God Helmet.  “…misinformation concerning the bases and efficacy of this new technology persist.  Here, we present detailed technical clarifications and rebuttals to refute these misconceptions.”

This paper describes a study to test if the God Helmet could elicit such pleasant feelings that the subjects were annoyed if they were interrupted by the experimenter asking them to talk about their experiences.
17 Men and 18 women “listened to a brief narrative and then were exposed for 30 min. to a control condition or to a weak (1 microTesla) complex magnetic field applied over the left hemisphere, the right hemisphere, or bilaterally. The subjects were interrupted intermittently to report their thoughts during this period.” “… we predicted that the group who received the bilateral stimulation should report greater irritability because of their disrupted pleasant experiences. The results supported this hypothesis.

Additional note:   The God Helmet was used in an episode of the TV program “Strange world”, where it was used to elicit an out-of-body experience, lucid dreaming, and other phenomena, including “cosmic” blue and purple visions.

There is a book on the God Helmet, which goes over the theories supporting it, some of the experiments and some debate material. 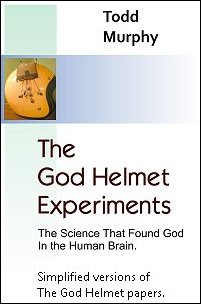