The God Helmet is not debunked, and it’s not a placebo. Its been validated by a new study.


The God Helmet Has Not Been Debunked, and it’s Not a Placebo.

Some people have tried to claim that the God Helmet has been “debunked”, or that it’s a placebo.

These claims are not true.  Some of them originate from media reports of a study  using a “pretend” helmet at a music festival.  You can read our reply online.

These claims are based on a few arguments, and we will look at them below.

The links on this page open in new windows.  Close them to keep your mobile device running quickly.

An overview of the controversy over the God/Koren Helmet.

Fiction: No God Helmet Experiment has been replicated.

Fact: A God Helmet Experiment has been replicated.

Quote: “A pair of researchers in Brazil stimulated the temporal lobes of their subjects with fluctuating magnetic fields (also used in the God Helmet experiments), and then analyzed the words the subjects used to describe their experiences. Working independently, they found that the subjects who did not receive any stimulation (the control subjects) spoke about their experiences differently than the ones who did receive the magnetic stimulation. Published in the Journal Of Consciousness Exploration and Research, the report said: “Analysis of the subjects verbal reports, using Whissell’s Dictionary of Affect in Language, revealed significant differences between subjects and controls, as well as less robust effects for suggestion and expectation.”

Fiction: The magnetic fields are not strong enough.

Fact: There has been lots of research with low-intensity magnetic fields.

Fact: Controls and double-blind conditions are a standard part of the God Helmet Experiments, so the results are not due to placebo effect.

Quote: “Let me underscore that we have applied double-blind protocols in our “sensed presence” studies, (to make the differences in stimulation explicit) by quoting another of our papers:
“Under double-blind conditions, the subjects who were exposed to the burst-firing pattern presented over both hemispheres or the right hemisphere reported more sensed presences than those exposed to the sham-field [placebo] or to left hemispheric presentations. Subjects in the latter condition reported fewer sensed presences than the sham-field controls.”

Fiction: Persinger’s God Helmet results can be explained by the suggestibility of the participants.

Fact: Suggestibility was measured and taken into account, and doesn’t explain Persinger’s results.

Quote: “For many of our experiments that created the sensed presence, we measured suggestibility directly using a well-established protocol (Spiegel, 1978). We found that analyzing the data for the person’s hypnotizability score did not reduce the intensity of the sensed presence produced by the specific magnetic field pattern. The key paper was called “Experimental facilitation of the sensed presence is predicted by specific patterns of applied magnetic fields not by suggestibility: re-analysis of 19 experiments”. It was published in the International Journal of Neuroscience.

Another response was published in Neuroscience Letters.

Fact: Dawkins had been drinking before His God Helmet Session.

Quote: “He had been drinking. The scent was easily noticed. In addition, he was obliged to sit in hot lights within the chamber for almost an hour as the BBC director managed several television studio details before the experiment began. This forced us to deviate from our typical protocol where the person walks into the dimly lit chamber, and we begin the experiment within a few minutes. We have found that intoxication, particularly ethanol, interferes with the experimental induction of the sensed presence. That is why we always employed an EEG monitoring at the time of the exposure. If the brain state is not optimal, similar to the calm or relaxation that facilitates meditation or prayer, the fields do not optimally interact.”

These are the principle arguments, and none of them are well-founded. Click on the links to go to pages where the evidence, with references – can be seen in full.

There is also a comprehensive reply to criticisms of the God Helmet. (PDF – opens in a new Window) 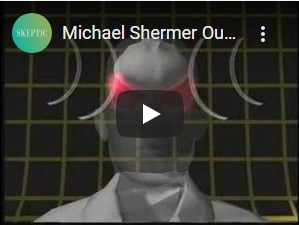 Michael Shermer (Editor of Skeptical Enquirer magazine) had a strong response to The God Helmet, including an out-of-body Experience.

We Do Not Allow Suggestion or Suggestibility to Influence our Lab Results.

Our results can’t be attributed to suggestion.

God Helmet and many other of our results have been replicated.

Replications of our work on Geomagnetism and Paranormal Phenomena.

My theories are not based on religiousness in epileptics.

Religious belief is not an epileptic phenomenon.