Videos on Spirituality and the Brain

Videos on Spirituality and the Brain

Click here for essays and articles on spirituality and the brain.

Presenting our 9 hour video lecture series on spirituality and the brain (and a few other things).

Spirituality and the Brain 1 – “God and the Brain“, is a lecture about the Persinger “God Helmet” (actually the Koren Helmet) and the 8 Coil Shakti by neuroscientist and author Todd Murphy. It covers visions of God, Near-Death Experiences, and other themes in neurotheology, the field that integrates neuroscience and spirituality. This is the first of six lectures on Spirituality and the Brain by the inventor of the 8 Coil Shakti and the Shiva Neural Stimulation system, which duplicates the procedures used in the God Helmet experiments. He has been a member of Laurentian University’s Behavioral Neuroscience research group, under the direction of Dr. M. A. Persinger, since 1998. Click here.

Todd Murphy’s book “Sacred Pathways: The Brain’s Role in Religious and Mystic Experiences” (foreword by His Holiness, The Dalai Lama) is now available. It has a more in-depth discussion of the brain’s role in the experience of God than this video lecture. Click HERE.

Note that the closed captions are suggested for all viewers.

There has been some debate around the God Helmet, with critics saying that its effects are due to suggestibility and that its magnetic fields are not strong enough to reach the brain. A recent study tells us that this isn’t true. Here’s the link, and here’s a news report (opens in a new window).

Spirituality and the Brain 2 – This lecture by scientist and author Todd Murphy discusses “Darwinian Reincarnation”, a hypothesis that treats rebirth as a human behavior from the perspective of biological evolution. This talk describes the “algorithmic reincarnation” hypothesis published in the Journal for near-death studies, a peer-reviewed scientific journal. This lecture is given by Todd Murphy, the creator of the 8 Coil Shakti, and the Shiva Neural stimulation System, which replicates the Persinger “God Helmet”. Subtitles in English and Hindi.

Sept. 2015 – Todd Murphy’s book “Sacred Pathways: The Brain’s Role in Religious and Mystic Experiences” (foreword by His Holiness, The Dalai Lama) is now available. It has a more in-depth discussion of reincarnation than this video lecture. Click HERE.

3 Enlightenment, Self, and the Brain. How the brain changes with final liberation 1:39:00 (Close Captioned)

Spirituality and the Brain 3 – This lecture, by neuroscientist and author Todd Murphy, explores a hypothesis about what happens in the brain when a person attains enlightenment. Using concepts in neurotheology developed by Michael A. Persinger (inventor of the God Helmet), Murphy (inventor of the 8 Coil Shakti neural stimulation system) explores the brain’s role in enlightenment as understood in Buddhism. The talk also looks at the self (or sense of self), and how it’s place as a brain function allows it to be flexible enough to change as a person becomes enlightened. It examines a few case histories, including those of Ramana Maharishi, Bhagwan Shree Rajneesh (Osho), The Buddha, and some others.

Spirituality and the Brain 4 – This lecture, by Neuroscientist and author Todd Murphy describes how telepathy and remote viewing have been generated in laboratory settings by Dr. M. A. Persinger (inventor of the “God Helmet”) using “The Octopus” and “Shiva”, circumcerebral (around the head) neural stimulation devices. It also discusses a case history of a possible miracle elicited using neural stimulation. This is part of a series of talks in neurotheology given by the inventor of the 8 Coil Shakti and the Shiva Neural Stimulation system (which duplicates both the God Helmet and the “Octopus” described in the lecture). Psychic skills were outside the range of science until the experiments described in this lecture were published in the peer-reviewed scientific literature. These articles can be found by searching for ‘circumcerebral’ at www.pubmed.com.

The Shiva Magnetic system can be obtained here:
A Swiss research group used the Shiva system in one study, and their preliminary report is online here.

Spirituality and the Brain 5 –This lecture in neurotheology focuses on spiritual teachings about the body by neuroscientist Todd Murphy. Starting with a hypothesis (only a hypothesis; there is no evidence as yet) about Kundalini and how it projects our states of consciousness into our bodies, it also looks at the neural basis for Subtle bodies. There is also a brief discussion of Chi and Yoga. This talk is given by Todd Murphy, inventor of the 8 Coil Shakti (similar to the Persinger God Helmet) and the Shiva Neural stimulation system.

Spirituality and the Brain 6 – The lecture by neuroscientist and author Todd Murphy (developer of the 8 Coil Shakti and The Shiva Neural Stimulation system), discusses how to apply neuroscience to your own spiritual process. It looks at common altered-state experiences, like the ‘sensed presence’, deja vu, tingly sensations, and others. It also looks at how to choose spiritual practices (by looking at ‘temporal lobe signs’ (also called Complex Partial Epileptic Signs) as well as using a high-tech method; complex magnetic neural stimulation. This video also features a discussion of the Persinger “God Helmet” (actually the “Koren Helmet”) and the future of spirituality. 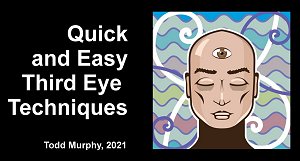 This video explains two fast and easy techniques for opening your third eye (“The mind’s eye”), or making it more available in your day-to-day life, even if yours is already open. One of them can also be used to ‘jump start’ Vipassana and Zen Buddhist Meditation.

It’s based on the idea that the 3rd eye involves the “inner vision” that appears with dreams, imagination, visual memory, or traditional visualization techniques like the ones found in Tibetan Buddhism.

The two techniques can be combined with many shamanic methods, as well as normal psychic training and practice.

These third eye methods are done only briefly, for as little as a few seconds. How OFTEN you ‘connect’ with your mind’s eye can be more important than how DEEP the connection is.

Very few spiritual techniques are equally effective for everyone, and all of them need some effort.

The two methods in this video can be powerful tools, but also fun toys. Have fun, and don’t make them a chore.

Some viewers may want to know that the hippocampus on the right side of the brain is the primary source for inner images, including dreams, pictoral memories, and psychic imagery (whether accurate or not).

Responding to the “Fake” or “Placebo” God Helmet experiment carried out at a Dutch Music Festival. The results from placebos should always be compared to the results from “live” subjects. Persinger’s God Helmet experiments used placebo groups in his experiments, and his actual subjects had many (up to 8 times) more experiences than his controls. The Dutch Experiment used white noise, a mild hallucinogenic stimulus, so it wasn’t really a placebo procedure. Note that the closed captions are suggested for all viewers.

An interview with Todd Murphy on the God Helmet; a little more technical than most.

Also of interest: One of the many God Helmet experiments has recently been replicated. Here is the link to the study.

An Atheist in Defense of Religion – rejecting Richard Dawkins’ idea that faith is a delusion.

Presented by Todd Murphy, author of “Sacred Pathways, The Brain’s Role in Religious and Mystic Experiences”, this slideshow presents the idea that there are two schools of atheism. One of them holds that religion is part of our cultures and evolutionary history. It is (or once was) crucial for our survival, so that we, as a species, cannot be truly human without it. The other school of thought, with Richard Dawkins as its figurehead, tells us that religious belief is a delusion, and its extremists even call for religion to be abolished.

Many religious beliefs help us to live with others, survive, and even gain “social rank”. Religion, Murphy tells us, is good for people, and the “adaptive” (positive) value of the behaviors it motivates are more important than the truth or falsehood of its beliefs. We are not evolved, he tells us, to believe the truth, but rather to believe things that increase our chances for survival.

Religion, even religion that denies evolution, is part of our evolutionary heritage.

Solving the “Hard Problem”: Consciousness as an Intrinsic Property of Magnetic Fields. (52:00)

What does it feel like to be a magnetic field, coming from millions of magnets? It feels like awareness. How does consciousnesses, an ‘insubstantial’ and inherently subjective phenomenon, arise out of the brain’s activity? This is the first “hard problem” as posited by David Chalmers. How do all the perceptions, emotions, and thoughts in our brains and minds, each one working in a separate ‘range’ of experience, come together to form the unified minds we know firsthand (The second “hard problem”)?

This video presents a new concept of Jungian archetypes. I offer the idea that archetypes aren’t ways to see ourselves by identifying with gods and goddesses within, but instead, they’re recognition templates that let us see others as heroic, wise, compassionate or as sacred beings.

If archetypes exist, then their origin must lie in our evolutionary history, and they must have contributed to the survival of our species. When we see the best in others, especially after they do something that benefits our tribe or social group, we reward their actions, and motivate them to do the same thing again.

Praising others re-affirms their value to their people, and helps to keep the tribe together. When we see others do good for us, and respond as though they had a divine moment while they were doing it, and praise them as we might praise a god or goddess, we amplify their motivation to go on acting for the good of their people. Seeing divinity in ourselves can create a dangerous attitude. Seeing the divine in others helps us survive. There are archetypes in the human psyche, but they’re for seeing the divine in others, not ourselves.

Déjà vu is the feeling that the present moment has already occurred in the past. It’s a spiritual gift that can help you be more present in the here-and-now. It feels meaningful and profound, and can seem to evoke dreams or past lives.

This video explains what it means and the most popular theory about why it happens, both in the mind and the brain. It also goes over jamais vu, the opposite of deja vu, as well as a little information about how epilepsy can cause it.

This short film is a companion piece for the book “Deja vu & Other Spiritual Gifts: Enriching Your Spiritual Life with Easy Exercises from Brain Science.” (Available on Amazon.com)

This announces my book: “Sacred Pathways: The Brain’s role in religious and mystic experiences” Foreword by The Dalai Lama.

Interview with Liz Haggerty and Todd Murphy 1:27:00 (Close Captioned)
Interview with a journalism student at Ryerson University writing about paranormal investigations, May 2007 39 minutes. 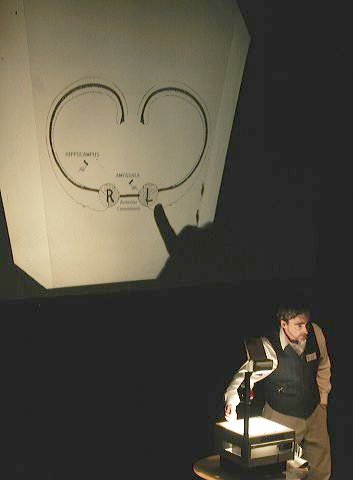