A New Kind of Meditation Based on Brain Science.

Meditation Practices based on Brain science.

At present, we have three “meditations” which are based only on recent discoveries in neuroscience. All of them are similar to visualizations, and all rely on the brains basic division into left and right hemispheres.

The first and more extensively tested, comes from the experience of the Sensed Presence.

The sensed presence is that feeling that there is someone or some living, conscious entity close by you, but when you turn to look, you don’t find anybody there. There are several variations on the theme. In one, the person feels that the ‘presence’ is a being they know, like a deity they pray to, the spirit of a person they have known who has died, or a spiritual teacher.

This experience only happens when a person is in an altered state of consciousness. These exercises begin with paying attention to the breath to facilitate the state.

After the person has their attention drawn there, they are asked to imagine that they are experiencing a presence, and that the feeling is emanating from a point behind them, and to their left.

The sensed presence is an ‘amygdala’ experience. This only means that when a person is having this experience, their amygdala will be found to be either the most excited structure in their brain, or one of the most excited.

Conversely, if a person has their amygdala stimulated, they are very likely to have a sensed presence experience. This has actually happened in several clinical and experimental settings.

If a person has a sensed presence experience, and their left amygdala is more active than the one on the right, the experience is probably going to be pleasant [although some people have this reversed, similar to left-handedness]. If the right amygdala is most active, then the experience is probably going to be unpleasant. Pleasant means anything from feeling mildly safe to being in complete ecstasy. Unpleasant means anything from mildly apprehensive to a feeling of impending doom.

When research subjects were asked to do this exercise, the most common sensation it created was a feeling of being safe and protected. The ones do were most prone to altered state experiences were also most likely to confabulate a visual image of the presence they imagined.

Some images that appeared were angels, monks in hooded robes, knights on horseback in shining armor, spirit familiars, deities, aliens, and a variety of other beings.

When people who have had near-death experiences do this practice, they re-experience fragments of their NDEs.

Most subjects experienced unpleasant feelings when they imagined a presence on the right side. A few experienced positive feelings on both sides. These latter individuals were all involved in regular, ongoing spiritual practices. This area of research is fairly new ground, but there is precedent in a study done in which students were asked to imagine holding a baby. Afterwards, they were asked what side of their bodies they imagined. 72% of the women, and 65% of the men had preferred their left side. (Nakamichi, 1995)

The second neuro-meditation, if we can call it that, is based on the experience of infinite space. This experience, which we can call the void, occurs in NDEs, hallucinogenic drug experiences, temporal lobe epilepsy, and a variety of other contexts. Sometimes it comes as an experience of infinite dark space that is more felt than seen. Other times it comes as a vision of a field of stars. Most often, It manifests as a seemingly unending void with a single point of light. This state has also been called “the source” because while a person is experiencing it, they can encounter a wide variety of imagery.

One very influential Buddhist text claims that if an individual acquires the ability to 1) enter this state at will, 2) temporarily suppress the appearance of involuntarily appearing visual imagery, and 3) elicit specific, chosen, visualizations, then the content of those visualizations will become veridical (‘real’). This, we are told, is basis of all procedures for doing miracles. It’s not important, at present, to think about whether the teaching might be an artifact of an actual neural process. The point here is that the experience of an infinite space has a special significance, just like the experience of sacred presences, such as angels, spirit familiars, or God.

The imagined space meditation begins with paying attention to the breath.

You imagine a wall is located behind you, and to your left. On the other (right) side, there is nothing but endless space. The person holds the imagination for as long as they can. That’s the entire technique.

There are differences between the typical effects of each method.

The imagined space meditation tends to elicit a more cognitive response. On the positive side (usually the right) the feeling is one of being engaged, involved, interested, or excited. On the negative side, it tends to create boredom, feeling “dull’, or a sense of being enervated. All these words refer more to conscious mental processes, such as linguistic thought.

The sensed presence meditation has a much more emotional feeling to it. On the positive side, it creates feelings of safety, of being comforted, protected. It also creates feeling of well-being, from a quiet sense of happiness to (in one case) “joy so strong I thought it was going to kill me’

These two techniques are important research tools in my work. The sensed presence technique appears to be amygdalar in it effects, while the imagined space technique seems to be hippocampal. Together, they have the potential to look into the limbic system in altogether new, and non-intrusive ways.

There is another technique I’ve found, but its effects are quite different. It’s a visual technique, but it seems to access hippocampal activity, at least that’s what the phenomenology implies. I found it introspectively, and I’m still trying to figure out how it works.

First, close your eyes and be aware of your breathing. Then look into the darkness behind your eyelids. Orient your eyes towards the point directly in front of you. At the same time, place your visual attention on a point above it. To do it you will have to separate the direction of your visual attention from the direction of your eyes. One person found that it created a large amount of visual imagery in just a few seconds. Another found themselves disappearing, felt shocked at this and pulled themselves out of the experience.

Here’s a YouTube Video explaining this, from our no-frills yogi friend (and all-around good guy), Forrest Knutson. (Opens in a new Window) 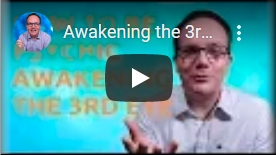 One last point to mention. All the experiences I have mentioned here happened within one minute of beginning the practice the first time. Those who tried them again on their own often found that later experiences were different. A few of the research subjects have later reported that the Sensed Presence technique became a part of their regular spiritual practice.

There is also another point to add concerning brain anatomy.

These techniques are based on the imagination. As such, their effects on the brain’s activity is largely going to be confined to the surface structures of the temporal lobes. The deeper, limbic, structures would be more implicated in hallucinatory experiences than imaginative ones.

This exercise consists of using your imagination to mentally divide your body in two – left and right sides.

Imagine a vertical line that runs through your nose, your navel, and the length of the torso. Try to ‘feel’ each side of your body separately. You should notice that each side seems to have a different feel to it. Perhaps one might call it an inner texture. Choose the side that feels best to you. One side will almost certainly feel more relaxed than the other.

You should find that your sense of your body has changed and that your mood will have improved, too.

My hypothesis to explain this is that this imagination selectively activates the Caudate Nucleus, a structure that integrates your emotional state with your body’s arousal level, and that works a bit differently on the two sides of your body. It can be quite pleasant for some people. This is a newer addition to these techniques, and your e-mail comments will be appreciated.

Here’s a YouTube Video explaining this, from our no-frills yogi friend (and all-around good guy), Forrest Knutson  (Opens in a new Window) 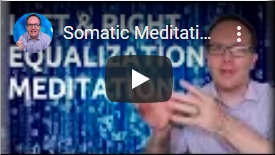 Please see our books on science and mysticism.

Nakamichi, Masayuki “A Child-Holding Thought Experiment: Students Prefer to Imagine Holding an Infant on The Left Side of the Body.” Perceptual and Motor Skills 1995, 80, 687-690