Out of Body experiences and the Angular Gyrus

Out of Body Experiences and the Angular Gyrus of the Brain.

A commentary on the 2002 Press release following a study by Dr. Olaf Blanke

A new study suggests these “out-of-body” and “near-death” experiences may be explained as a portion of the brain misfiring under stress. It’s based on the visions one just one epilepsy patient.

Do OBEs happen ONLY in the brain?

This is not known. There have been cases where people have had OBEs, and seen things from an out-of-body perspective that they could not have seen from their body’s location. This writer holds that the brain is involved in triggering OBEs, but other mechanisms may play a role when they’re actually happening.

A nurse at Hartford Hospital states that she worked with a patient described an NDE in which she saw a red shoe on the roof of the hospital during her OBE, which a janitor then retrieved. Kenneth Ring describes three such cases involving shoes, shoelaces and a yellow smock and also tells a story from a Seattle social worker who also retrieved a shoe outside a window ledge that was identified by a patient during an NDE.

One explanation, which these (and other) researchers failed to consider, is that out-of-body experiences may be a natural, organic function of the brain. Their occurrence in near-death experiences seems to suggest that they’re a part of the human death-process. That they also happen during seizures may have more to do with the unique pathology of epileptic electrical activity, which can recruit sets of pathways that otherwise would only function in rare states of consciousness. Almost any part of the brain can be involved in an epileptic seizure. If we suppose that out-of-body experiences represent a rare but functional kind of brain activation, then it’s not so unreasonable to suppose that epilepsy triggers them, but that the reason that they are possible is that our brains are pre-wired to produce these experiences. The seizure may only spread into its areas, triggering the experience. Further, the fact a few individuals are able to have out-of-body experiences at will suggest that the reason for their existence is not epilepsy.

Out-of-Body experiences are one of the best-known episodes in Near-Death experiences. That they are reported from many cultures, and that they are so similar from one to the next suggests that they are neither accidental nor random. Rather, they constitute a human behavior, one that like all common human behaviors, are a part of our unique evolutionary history. In other words, they contribute to our survival in some way. This concept has been more fully explored in another article.

One explanation for these experiences includes the notion that they represent a very unusual activation of our brain’s spatial perception. In this explanation, a person who’s having an out-of-body experience perceives themselves as having a different location in space than their body. If this model is valid, then activation of any one of the brain areas responsible for spatial perception may be required for an OBE. The angular gyrus is a small area in the temporal-parietal-occipital region of brain’s surface. One possibility is that the epileptic who was having an out-of-body experience in this study was one whose seizural activity included the angular gyrus so that particular area of their brain was more sensitive than other areas (that also contribute to the experience). In addition to this area, there are other candidates. One of them is the hippocampus, and the other is an area of the brain’s cortex which is directly connected to the hippocampus called the parahippocampal region. 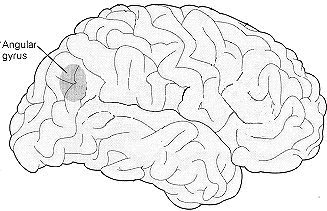 They point to an area on the surface of the brain known as the angular gyrus. The angular gyrus is thought to play a role in the way the brain analyzes sensory information that allow us to perceive our bodies. When it misfires, they suggest, the result can be a sense of floating, and seeing the world from outside of the body. The findings were published in the respected science journal “Nature”.

While the angular gyrus is involved in our perception of our bodies, its function in this regard does not exclude other brain structures from being involved.

“We do not fully understand the neurological mechanism that causes OBEs,” conceded the study’s lead researcher, Dr. Olaf Blanke, a neurologist at two Swiss University Hospitals in Geneva and Lausanne.

The experiment goes a long way toward providing a scientific explanation for what some believe is a paranormal phenomenon, even if the study is based on only one patient.

“Since all of our brains are wired in a similar manner, there is no reason to think that stimulation of this brain region in other patients will not corroborate the finding,” said psychologist Michael Shermer, of the Skeptic Society, which seeks to debunk alien abductions, ESP and similar claims.

“It’s another blow against those who believe that the mind and spirit are somehow separate from the brain,” Shermer said. “In reality, all experience is derived from the brain.”

Neurologist Dr. Bruce Greyson of the University of Virginia said the experiment does not necessarily prove that all OBEs are illusions. He said it is possible that some OBEs occur in different ways than the scientists suspect.

Dr. Bruce Greyson is also the editor for The Journal for Near-death Studies, which has published several accounts of veridical of body experiences. These are cases in which a person has an out-of-body experience, sees something that would not be visible from their body’s location, and then later has their perception validated. In one case, an elderly woman in intensive care had a heart attack followed by a near-death experience which included an out-of-body experience. During her out-of-body experience she saw the roof of the hospital and noticed are red tennis shoe. A maintenance worker and some medical observers went to the roof of the hospital where they retrieved the shoe. While this seems to prove consciousness can exist separate from the brain, it leaves open one possibility. It may be that the mind, when it is outside of the body has a structure, and that structure reflects the structure of the brain. Proving the existence of consciousness outside the body, or separate from the brain may prove to be very elusive, even if the ideas that support it are valid.

The Swiss researchers mapped the brain activity of a 43-year old epileptic woman who had been experiencing seizures for 11 years. They implanted electrodes to stimulate portions of her brain’s right temporal lobe. The angular gyrus is an area of the surface of the brain close to the temporal lobe, and is associated with perception of sound, touch, memory and speech.

In the 1950’s, the Canadian neurosurgeon Wilder Penfield also succeeded in eliciting an out of body experience using electrical stimulation, but he was stimulating a very different area of the brain, the sylvian fissure. The sylvian fissure divides the temporal lobes from the rest of the brain along its length. Dr. Michael Persinger has elicited out-of-body experiences through stimulation of the temporal lobes using magnetic signals derived from the EEG signature of one of the structures deep in the temporal lobes. Clearly, there is not a single “brain center” that supports out-of-body experiences but rather a widely distributed set of pathways. An individual’s unique neural history leave any one of these most likely to produce the experience for that individual.

Blanke said that at other times during the same session, the patient screamed because she “saw” her legs shortening, and “saw” her knees about to hit her face.

This experience is very similar to an experience called “micropsia”, in which a person may experience things as being closer than they really are. The opposite experience, called ‘macropsia’ is the name for the perception that things are larger and farther away than they actually are. The same areas of the brain we are discussing here are also involved in this experience. This writer has personally experienced macropsia as preceding OBEs.

Millions of people have reported OBEs, but only a few have been studied in laboratory or clinical settings.

Other researchers have offered the explanation that OBEs can happen when brain cells die from lack of oxygen, or when the brain releases pain-reducing chemicals called endorphins.

Now that out-of-body experiences are entering the domain of real science, a simple question emerges. Will it be possible to develop technology your procedures that will induce out-of-body experiences on demand? The answer is yes. Magnetic Brain Stimulation, directed towards the angular gyrus, the temporal lobes, or the hippocampus may have a chance of making this experience available to all. Not all people are equally prone to the experience, even with correctly targeted stimulation.  Out-of-body experiences have been elicited by these means in the past, even though they were not designed specifically for that purpose.

This interpretation of Dr. Blanke’s observation of out-of-body experience is based on newer easily obtainable technology which offers different conclusions, his work constitutes a substantial step forward in our ability to understand out-of-body experiences and eventually, to induce them.

The spiritual adage “You are not your body ” is easy for anyone who is ever been out of their body to understand, and this understanding has been of great help to many people who are developing spiritually.

Technology that can help induce out-of-body experiences may also be of service in helping people to develop their overall spiritual lives. In the end, this can only be of benefit to the world. It’s also an experience that for whatever reason, people simply want to have. It’s intriguing, engaging, and many people have devoted huge efforts to practicing techniques designed to bring them out of their bodies. The spiritual insights reserved for those who have had the experience can be available to all.

Here’s a simple imaginative exercise that can help some people learn to have out-of-body experiences (Written by a nine-year-old child).

You can see the abstract of Dr. Blanke’s research paper.