Spiritual Visions – Spirituality and the Brain 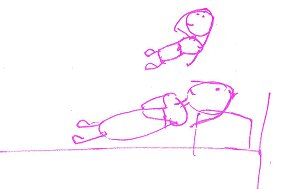 This picture was drawn by an 8-year-old girl who showed many signs of Temporal Lobe Epilepsy.

For about a year, she had occasional out-of-body experiences. They stopped for about six months, and then began again. The second time around for her, she found herself able to have them at will.

How to go out of your body:

When you’re in your bed,
Pretend you’re on a roller coaster.
And try to move, but don’t really move.
Eventually, you’ll start to get faster and faster.
And you’ll actually feel like you’re shaking.

At some point, you’ll just pop out of your body.

You know you’re really out of your body if you can turn around and see yourself.

If you have a desk in your room, you’ll actually see it.

You can feel it when you are waking up, and then you just go back into your body.

Try to think of a place, like a movie theater, and you’ll just be there.
You can watch any movie.

Do not go with any person who is having an out of body, too. Because you can end up at their house when you don’t want to.

How to go someplace when you’re out of your body.

How to be a psychic.

Take some time relaxing. Get so relaxed, you don’t even swallow. Get someone to make cards with shapes on them, like stars, hexagons, squares, and circles. Have someone hold up the cards so you can’t see them. Then, just imagine which one it is. That’s just warming up.

How to be REALLY psychic.

If you want to know about something, think of it, and the first thing that pops into your head, or even explodes in your head, that’s probably what’s going to happen, if anything happens.

How to heal someone.

When somebody just has a pain, any pain at all, you take your hands and pretend there’s hole in them that can pull things in and out. Put it on the place where the person has pain. And then try to think of those holes in your hands. Try to think that you are taking out the pain, and it will work.

This picture was drawn by a 7-year-old boy who showed many signs of Temporal Lobe Epilepsy. He said the vision came to him at night, and that it was very frightening for him.

His father didn’t think his experiences were significant. Until he talked to me, that is.

One conversation later, that kid knew that God was not punishing him with a demon, and that many people had similar experiences.

He was not alone with it any longer.

To cope with his experience he applied the ‘sensed presence’ guided meditation. Successfully.

Learn how to do it.

This image has been called “The Void”, and the “Womb of Kali”.

It’s also been called “The Source”.

It’s associated with cognitive events more than emotional ones, and when it comes to children, It tends to create a lot of fear.

In spiritual contexts, like during meditation, it tends to associate with visualization skills, and even out-of-body experiences.

This picture was drawn by an 8 year-old girl who had many experiences suggestive of Temporal lobe epilepsy.

It shows the object of one of her visions, which she called “The Scary Skull Guy”, a man with an ax lodged in his head.

It was not one of her common visions, but it happened sometimes.

To cope with her experience she applied the ‘sensed presence’ guided meditation. Successfully.

Learn how to do it. 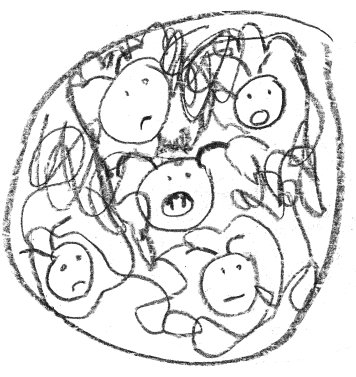 “Yesterday my other daughter of 12 was playing on the piano.

(She) was staring into thin air, with this very sad expression on her face.

At the time she did not want to talk.

When we got home I took her aside, and she said that she saw a circle with peoples heads inside – but all were sad or angry.

I then asked her to draw it for me.” 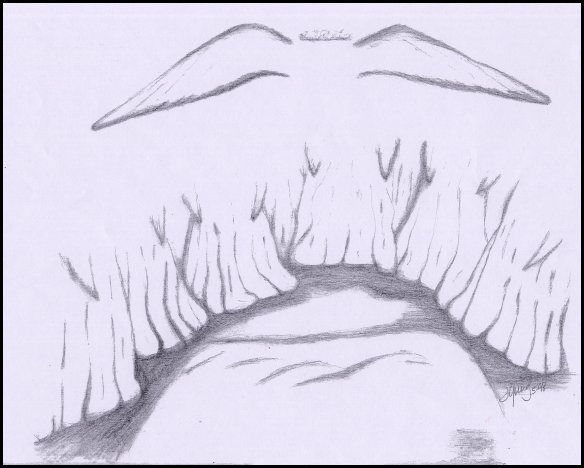 “I had a vision back in 2003 that defies explanation. I had just gone to bed after an emotional day and actually saw 10 or 11 angels gathered around my bed. This was not a hallucination! The vision was so ingrained in my brain, I did a pencil drawing of it and it sits in my living room now.

My daughter suddenly began having migraines out of nowhere. She says she sees things when she is experiencing her migraine. She is 9 yrs old. I have attached what she sees.
The picture is sideways. The orange and red going across should be facing where it is the top of page. That is fire. There are always 2 kids. One dressed in all red and one all orange. There staring in the corners. The middle of the wall is dark and is like a forest. The tops of trees are burning. It has happened a total of 4 times and every time no matter her location she sees this image.

If you or your child has visions of any kind, and you have a picture, no matter how poor the quality, please e-mail it to me. I will post it here, on this page, and your image will then be available for others to look at. Children’s experiences can be that hardest to cope with, so I especially encourage their parents to send in pictures their kids have drawn. One day soon, I hope to have a gallery where people can look to see how others have similar visions.

Send us an email.