A Reply to the Idea that Religion is a Delusion. It’s more than that.

Skepticism Toward Belief and Experience.

To say something was only a dream may mean that the events in it never happened, but it doesn’t mean that no one experienced it.

While a skeptical attitude toward near death experiences may mean that one doesn’t take them as evidence of life after death, it cannot embrace the idea that the stories are fabricated.

To dismiss near death experiences as sheer nonsense leads to conclusions even more ridiculous than orthodox Christian interpretations of them.

On the other hand your position is much stronger if you consider the existence of Atlantis to be nonsense,

Where am I leading?

My point here is to ask that scientific skeptics recognize an important distinction between two types of material that they have traditionally liked to debunk.

The first, and least intellectually strenuous, is about beliefs. I have no qualms whatsoever about denying the existence of  Atlantis, or Lemuria, a hollow earth, a fountain of youth, or that I will go to hell if I do not accept Jesus Christ as my personal savior.

The development of science in the Western world was characterized by a series of intellectual revolutions. In these, traditional beliefs were replaced by more modern theories. In each case, the traditional beliefs put up a bit of a struggle. Darwin was opposed by those who believe in the book of Genesis. Anthropology was opposed by those who believed that all cultures derived from the garden of Eden.

Scientific anatomy began when a few individuals rejected the Roman anatomist Galen, who based his observations on dissections carried out on pigs. His text was used in the medical academies of Europe during the renaissance, and regarded as unquestionable truth.

Copernicus and Galileo both confronted the medieval Christian view that the earth was at the center of the universe.

If the first scientists had not cultivated a skeptical view toward the ideas and beliefs of their times, science would not exist today.

The very origin of science depended upon the development of skepticism.

In recent decades, the development of scientific skepticism has included a skeptical view towards experiences. Near death experiences are a case in point. Actually, they present an almost perfect example.

Can we say that near death experiences do not exist? No, but we can maintain a skeptical attitude towards their explanation.

If a man dies, and is resuscitated, and says he saw God, that does not prove that there is a God in the usual meaning of the word. However, many such reports, taken together, do constitute evidence that the experience of God is possible. Not that he exists, but that he can be experienced.

A skeptic might dismiss it as a hallucination, or as a particularly elaborate, vivid, and rarer sort of dream. Perhaps recalling such an experience is an example of false memory syndrome. The evidence doesn’t support these interpretations.

A skeptical view of these experiences would begin with the rejection of explanations that cannot be verified or falsified. The man who sees God while clinically dead in an emergency room has had an experience, but it probably has nothing to do with how the universe began.

Near-death experiences have been subjected to intense scientific scrutiny since they were first uncovered in the mid 1970s. There are many popular books on the subject, ranging in quality from that of shoddy religious treatises to serious neuroscience and psychology.

And yet, the content of these experiences is just the sort of thing skeptics feed on.

I begin with near death experiences precisely because they’ve been studied so much. A skeptical response to them has to consist of more than dismissing them as hogwash.

What I’d like to argue here is that the same view should be taken towards other experiences that occur in altered states of consciousness.

One of the fundamental principles of modern neuroscience is that subjective experience, in any given moment, reflects the brain’s activity at that moment. Many experiences, including visions of god, can be explained in terms of brain activity.

It’s not enough say the UFO abductees never even left town. Today, the challenge is to explain why people are capable of having this experience. Alien abduction is a hallucination, though a highly elaborate one. People who report such episodes may not be having real experiences, but their experiences are real. If someone says that they were taken by aliens, they may not be telling the truth, but they aren’t lying either.

The same is true for dreams.

As it happens, there are a few predisposing factors that contribute to reports of alien abduction. One of them is a history of childhood abuse (Kenneth Ring – “The Omega Project”). There are other factors, but the point here is that when the reports are examined, together with the neurological and psychological profiles of the people making them, patterns emerge.

These patterns, whatever they may be, constitute the only valid refutation to the claim that there are aliens kidnapping people.

It’s not enough to say that the claims are nonsense. They can only be understood when we know why people make them.

There is another class of experiences, less easily understood. Psychic experiences.

These also have predisposing factors, such as a specific neural profile.

But psychic skills, and the reports of them, are in a different category. Alien abduction requires a very exotic claim – that there are beings from other planets (or ‘other dimensions’) coming here. Psychic claims have less flamboyant implications.

For example, there are many anecdotes where (for example) a mother in one place has a feeling that something is amiss with one of her children at the same time as they get into a car accident. These are anecdotes, and thus are not scientific evidence.

In a significant development for all scientific skeptics, some evidence has emerged that sheds light on these experiences.

In one experiment, pairs of emotionally bonded people were separated into two rooms. One of the rooms was equipped with an apparatus that would stimulate their brains with faint magnetic signals applied one at a time to eight coils arranged in a circle around the person’s head. The other member of the pair sat in a room with a set of pictures, each one stored in a sealed manila envelope.

The person who received the stimulation was told to speak about any images or thoughts they might experience. The person in the other room was told to examine the pictures. The themes the person receiving the stimulation reported in their thoughts matched the themes of the pictures. The effect was most pronounced when the signal was a variant on the “40hz component” – a characteristic feature of EEGs recorded in all states except dreamless sleep.

The study also found that the effect depended on specific levels of geomagnetic activity.

The study also suggested that the effect could be compared to the interaction between two identical Tesla coils.

The implication seems fairly clear – communication between human brains may actually exist, but that it’s not a gift from God or any ‘higher powers’. Rather, it’s a feature of normal brain function, though not necessarily of all brains. Evolution may have imposed a limitation, such that the advantage conferred by such cognitive skills are limited to a section of the population.

The mechanism implicated is a magnetic one. Information conveyed from one brain to another may originate from the inevitable magnetic concomitants to the electrical information (following Maxwell’s equations) in one brain, and is transmitted to other brains with the geomagnetic field as the medium.

How should a skeptic respond to this information? One response is to believe that the experiments are faked, but that would constitute a claim without evidence – something skeptics try to avoid.

Another is to accept that such skills do exist, but that the traditional beliefs about it are wrong.

Now that science is beginning to validate at least some of the claims of psychics, it’s even more important than before that the traditional explanations be rejected.

Because now, for the first time in history, there are alternative explanations.

When skeptics can offer nothing more convincing than cries of “Bunk!”, they don’t inspire the confidence of the general public.

What’s needed are better explanations for psychic reports than the psychics themselves offer.

One thing to consider is that the neurological profile of many psychics (characterized by more-sensitive-than usual-temporal-lobes) is also likely to find people holding ‘exotic’ views and opinions.

Unfortunately, the lines get a bit blurred. When psychics find their perceptions are validated, it has a way of encouraging them to consider their opinions as equally valid. A police psychic might see the the culprit of a crime with a helpful, though not necessarily complete accuracy, but that doesn’t mean their opinions have the status of fact.

On the other hand, the fact that many of their views may be nonsensical (consider trepanation, or magic charms, or the idea that we each have our inner totem animal, or that our palms reveal our future or past lives, or a host of other notions) is not evidence that their psychic perceptions are inaccurate.

The CIA is said to use psychics, especially remote viewers, regularly. But I’ve never heard of even one CIA palmist or tarot card reader. They are a practical lot there in Langley, VA. If you ask them why they use remote viewers, they won’t give you an answer that can satisfy a true scientific skeptic – one who demands seamless quantified expressions of every claim.

But if you accept their explanation on its own terms, you’ll find that it’s a pragmatic one. And pragmatism, if I may be permitted to coin an adage, is empiricism without quantification.

Is it scientific? No. Is it unsound? Again, no.

Psychics often assume that because they might be right about your uncle George’s gall bladder, they’re right about God’s ‘plan for the world’.

Skeptics often conclude that because a psychic’s more cosmic ideas might be nonsense, their specific psychic perceptions must be wrong, too.

Die-hard skeptics and believers in fringe ideas will both be challenged by some of the things that neuroscience is now uncovering.

Personally, I wouldn’t have it any other way.

Here is a video presentation that rejects the notion that religious belief is delusional, and suggests that it actually helped us to survive during our evolutionary history. 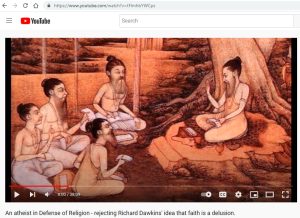