The Player for the Shiva Neural System.

The Shiva Neural Stimulation Software
◊ ONLINE SOFTWARE DEMO ◊  CLICK IMAGES TO VIEW CLOSE-UP.
Not all functions perform online – this demo is here so you can learn how it works.  It can’t be used to run actual sessions.
Legal: Shiva signals are based on templates licensed by Stan Koren and Dr. Michael A. Persinger.

THIS IS THE SHIVA PLAYER 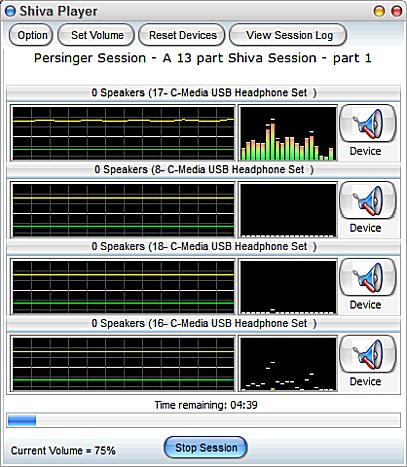 This is the software that actually produces the Shiva signals.

The interface for The Shiva Player shows four ‘playslots‘. Each one plays a single stereo audio file, with its two (left and right) channels.

Each selected sound device is listed under its corresponding playslot.  There are four identical USB devices on the system, and Windows will give each one a unique number.

To set up the Shiva System, you would click on one of the icons below, in the software. 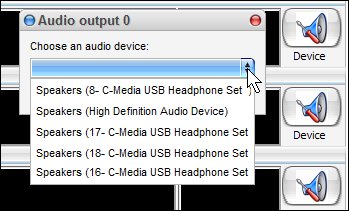 To use the eight independent channels, you must select all four of the USB Audio Devices, making sure that you only select the USB devices.  The software will alert you if any of them are selected twice.
Windows can change the order they appear in, so you have to do this each time you use the Shiva Unit.

It only takes a couple of minutes, and it’s very easy to learn.

Make sure that only the USB sound devices are used – not your computer’s sound card. You don’t have to have them in any particular order. Making sure which is which (aligning the software channels to the hardware channels) comes later on.

The Shiva Player launches with the signal already loaded, and the signals aligned to the correct sound devices (after you set it up). It uses small system files to launch it this way.  You’ll see a small window that says “do not close this window until the session is over”.  Please follow that instruction.

SETTING UP THE SHIVA PLAYER

There is a setup session to align the hardware channels to the software channels.  It loads a Shiva player session with a voice counting one to eight through the two channels for each of the four USB sound devices.  Use ordinary stereo headphones to listen to the eight channels. In one channel, you’ll hear a voice saying “one”.  That’s where you plug in the magnetic coils labeled “1”.

Run this test each time you connect your USB sound devices from your computer, or re-start your computer.  When you re-connect The Shiva System, your system may re-assign the USB sound devices to different places in its line, and that can put the signals in the wrong order, so you should listen to the output from each channel to keep them aligned.

The Shiva System can also be configured for the God Helmet.