Shiva is based on a laboratory apparatus called “The Octopus”, used in a series of successful experiments to induce psychic perceptions.  These experiments were carried out by Dr. M.A. Persinger, (see his endorsement) and his colleagues. Shiva is a magnetic brain stimulation system.  It’s the only laboratory developed and tested technology for awakening psychic abilities (and nurturing spiritual growth) in the world today.

Used according to instructions, The Shiva Neural System can help you develop psychic abilities and accelerate your spiritual growth.  It’s important to understand that it doesn’t do so automatically. You have to participate, practicing the psychic skill you want to acquire. Doing exercises to develop your skills and spirituality is part of the process. Without them, you may find your intuition improves; that you have worthwhile hunches more often, but clear psychic perceptions are less likely without some practice.  We all exercise our brains naturally in our day-to-day neural tasks. Even using your intuition in your work creates a context where Shiva’s effects can appear.

The magnetic fields spin around your head, clearing the way for psychic perceptions.

The Shiva Neural Stimulation System technology has been tested in laboratory experiments (published in peer-reviewed scientific journals) where it created telepathic phenomena and enhancements in remote viewing.  Its 8 channels circulate magnetic signals around your head through 16 magnetic coils.  User reports show how it also amplifies spirituality and spiritual ways of thinking and feeling.

This technology is available for the first time to the public through the Shiva Neural Stimulation System, which uses PC software to produce the signals. Like many computer devices, Shiva takes a bit of setup. The software contains all the instructions you need, and tech support is available to help you get it up and running.

When you were an infant, you acquired your sight by learning to see. You learned to focus your eyes on specific objects. You learned to tell the difference between a foreground and a background. You learned to use your depth perception to tell the difference between large objects that were far away, and smaller objects close to you. You learned that dark things are dark, and light things could seem dark because they were in a shadow. It’s the same with psychic perception. Psychic sense(s) need exercise to come forth, even when Shiva clears the way for them. It isn’t difficult to do, but less will happen if you don’t participate. Becoming psychic involves both enabling psychic perception and learning to use it. Click here for an article on how to do that.

Shiva can help with opening up psychic skills, but there have also been many reports of spiritual growth and development with the Shiva system.  People who do meditation, contemplative prayer, yoga, and other spiritual practices have developed psychic and spiritual skills (like “charisms”, “gifts” “siddhis” or “powers”) along the way.  Psychic skills rely on many of the same brain parts and processes that stand behind spiritual growth, so it’s not surprising that a process that develops one can also help build the other.  We can use a metaphor, and say that  Shiva is like steroids for your spiritual work.  Steroids can make weight lifting more productive, but they aren’t the weights, or the strength that lifts them.

Shiva Neural Stimulation gently stimulates the brain in a completely unique way. It circles magnetic signals around your head, keeping them moving at high speeds, usually around 9 times per second. This interacts with an important cortical (outer brain) pattern in a way that favors the right-hemisphere.  The non-verbal thinking that’s the basis for psychic and intuitive states are managed, so to speak, on the right side of the brain.

Shiva uses 8 pairs of magnetic coils to deliver its stimulation. The magnetic fields are about as strong as the ones from a telephone handset or a hair dryer.

EEG reads electrical activity from the brain, and it’s ‘traces’ are the original source for most of the signals used in Shiva Neural Stimulation. The different signals ‘tune’ the response to the signals to favor emotional, cognitive, or bodily responses.

The three different signals shown here all come from different areas of the brain, and each has different effects. They are produced using audio files that ‘play’ the signal to a set of magnetic coils, and the coils produce magnetic signals.

These are important brain parts; they form the core of the Limbic System, deep in the brain. Their activity shapes our moment to moment experiences, but not by themselves. They work with and through the cortex, the outer inch of the brain. These signals, which appear in EEG traces (so-called ‘brain waves’), are converted into audio files and applied to the brain using magnetic coils. The output from the coils activates these and some other areas of the brain.

The signals are applied through the outside of the head, so that even though the signal ‘targets’ a deeper structure, it’s application also involves the surface ones.

Shiva Neural Stimulation moves the signals around the outside of the head in a circular pattern, exposing many areas of the cortex. No single area of the cortex can dominate the effects of Shiva sessions.

The signals appear in different forms, with each form having the signal ‘chopped’ into different lengths as they’re played through the 8 channels. Some of them get faster as they go circle around your head, and some of them slow down.

Laboratory experiments have shown that counter-clockwise rotation is most effective.

This technology relies on avoiding habituation – changing the signals so that the brain doesn’t have as much opportunity to habituate – to ‘get used to’ them and ‘tune them out’. Shiva neural stimulation accomplishes this by changing the speed at which the signal moves from one coil to another, as well as the length of time the signal is produced from each coil. These times are very short, lasting only a fraction of a second.

This class of technology, called ‘circumcerebral’ (around the head) neural stimulation has been the subject of several studies. These very rigorous tests found that this technology enhanced remote viewing in an advanced psychic, as well as elicit psychic perceptions in others who had no psychic training.

Although there are several signals included with the Shiva software, one in particular is more studied than the rest, and is especially implicated in psychic perceptions. 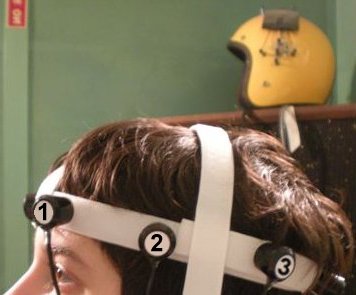 Early prototype of the Shiva System in use in the “God Helmet” Laboratory.

The signal is called the Modulated 40 Hertz ‘Chirp’ signal. It’s based on the ’40 hertz component’ seen in EEG readouts. This signal appears when we are awake and when we are dreaming, but not in dreamless sleep. It’s present whenever we are conscious. It’s been called “the binding factor” for human consciousness, suggesting that this is the activity that “holds it all together”. The modulated 40 Hz signal is almost in sync with the brain’s own ‘binding factor’, but not quite. It’s just different enough to interact with it; to disturb it slightly. When that happens, changes happen which are both changes in consciousness itself as they are “altered states of consciousness”. It seems that the state of consciousness that appears with this kind of stimulation is conducive to psychic perception. Not only does this help us to learn more about it, but it also allows us to try to enhance it deliberately.

An easy way to think of it is that the modulated 40 hertz ‘chirp’ signal, broken into constantly changing segments and applied in a circle around the head, disables the mechanism that ordinarily prevents psychic perceptions.

Shiva Neural Stimulation can also induce some phenomenal altered-state experiences, although there are no published studies so far. One unpublished result is that ‘the void’ experience is also a commonly reported effect. If you want to explore these states using Shiva, you should read about each of the signals, and decide which of them you want to try out first. Each one has the potential for a different kind of altered state in sensory deprivation. This means a good blindfold, and above all, silence. Altered-state experiences depend on temporal lobe activity, and a large part of the temporal lobe’s ongoing activity is dedicated to monitoring ambient sound. Keeping true acoustic silence during sessions frees up much of the temporal lobe’s activity, making it available to respond to the stimulation.  Not all sessions elicit such experiences during the session equally.  Contact tech support for more information about this.

NOTE: The Shiva software contains instructions for stripping down your Shiva unit to an 8 Coil Shakti unit and also includes “Shakti For Windows”, the software that drives the 8 Coil Shakti.

Further Note:
The Shiva Neural Stimulation System also comes with software and instructions that allow you to do “God Helmet” sessions.

The Shiva System uses the same hardware as the God Helmet, and includes both softwares, so it can be set up and used as either system.