Mood Enhancement with the 8 Coil Shakti

Mood Enhancement with the 8 Coil Shakti

The 8 Coil Shakti has a session called “the feelgood session” which has generated reports of strong mood enhancements.

Most people who find themselves feeling bad regularly have temporal lobes that are more active than the frontal lobes (and here we are not talking about psychiatric disorders).

It uses two signals; shaped like signals unique to the amygdala and the hippocampus. These are generated one after the other (‘in sequence’) with a four-second ‘latency’ between them. This latency mimics the brain’s own spaces between these signals.

The right amygdala and the left hippocampus, with their connections to the temporal lobes are both crucial for maintaining bad moods and emotions, and the habit of ‘negative thinking’. One way of understanding the ‘feelgood’ session is that it tells these structures to point their output to the frontal lobes of the brain. This mimics the temporary change in mood we can have when we get good news, or when a problem that has been bothering us is resolved, or when we approach a friend. (1, 2, 3). The design for this session takes advantage of the relationship between the frontal lobes and self-esteem (1, 2, 3).

All negative emotions are based on different levels of activity in specific brain parts on the left and right sides. The feelgood session applies the signals evenly to both sides of the head, so that the ones that are quiet in negative emotions are turned up, and the ones that are loud are turned down. The decisive structures are gently balanced against each other. You might think that it would be better to apply the signals to only one side to get the same effect, and that has been tried, but reports from Shakti users showed it was less effective than the method used in the feelgood session.

The most effective feelgood session is a one-phase session, with signals applied over the frontal lobes. There is another variation.

In this variation, the Shakti Coils are placed over the frontal and temporal lobes.

Note that the coils come in two polarities – North and South.

Activity in the temporal lobes builds up slowly, while it appears suddenly in the frontal lobes, creating a lasting improvement in your mood.

An alternative session can be done by running the ‘feelgood’ session, and bypassing the first phase, and doing only the second phase, which applies the signals only to the frontal lobes.

A number of people who have used this method of mood improvement have said that it ‘cut off’ their negativity. Something would happen that would trigger of anger, fear or sadness, and they would begin to feel the first intimations of those feelings, but after a very brief time, they found that these same feelings would give way to a positive response, as though they had effortlessly gotten hold of themselves in just a second or two.

The feelgood session can create an enhancement in mood unlike anything to be had from pills, meditation, or even a new pair of shoes.

Interestingly, this session has little effect on those who are already feeling good, just like aspirin has no effect if you are not in any pain. It’s also interesting is that it can sometimes have no effect until the morning after the session (this is very different from the action of psychiatric medications. Taking note of this can help you understand that this is not a treatment for psychiatric disorders). This brings us to another point. 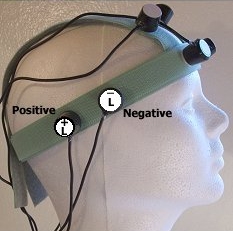 One of the best guides for telling if this session will help you to feel good is if you are at your worst in the morning. If you are not a “morning person”, then this session might be for you. Feeling bad in the morning is usually a sign that the temporal lobes, with their role in negative emotion, are not well-balanced with the frontal lobes, possibly due to bad dreams or to your brain not waking up smoothly in the morning. Your frontal lobes can still be partly asleep, while the temporal lobes are fully awake. Although this phenomenon has been studied in clinical situations (2, 3, 4, 5, 6, 7), it can also happen to healthy people; people who don’t have any psychiatric disorders.

This Shakti session is not intended for people with psychiatric disorders. If you have one, you should read this page before you order, and talk to your psychiatrist or doctor before you order the 8-Coil Shakti.

Shakti does not diagnose, treat, or prevent medical or psychiatric disorders.

The Shakti feelgood session isn’t one to induce altered states, especially the intense kind. It’s more to help you enjoy the things you do in your normal states of consciousness. To get out of your head and into the world and the people that surround you.

It uses two signals, not just one. One signal, derived from the amygdala, supports emotions, and the other, from the hippocampus, supports thoughts (“cognition”).  The combination of the two allows both positive thoughts and emotions to come out.

If your spiritual life is inhibited by fear, worry, anger, sadness, or other negative patterns, but you are not a psychiatric patient, the 8-Coil Shakti is for you.

The feelgood session should be done for six sessions (either weekly or every three days), followed by a three-week break.

How long do the effects last? The effects of one session will usually fall away in about 3 to 4 days, and when the session is repeated once a week for six weeks, the effects can last about six months. When you notice that negative patterns in your thoughts and feelings return, you can repeat a series of six weekly sessions. Let a minimum of three weeks pass between each series of six sessions.

The feelgood session works with two signals, derived from the amygdala and the hippocampus, the most  sensitive structures in the brain.

Shakti is a safe technology. It’s an example of ‘complex magnetic signal’ neural stimulation, which has been studied in the laboratory. There have been several studies have been with this class of technology using a signal derived from the amygdala (“burst-firing”).

Another study was done with the hippocampal signal.

There was also another study that used both signals.

The original developer of this technology issued an open letter about Shakti, attesting to its safety.

The testimonials page has some reports from the ‘feelgood‘ session.

Here is another blog on the subject.