SHAKTI IS A SAFE TECHNOLOGY 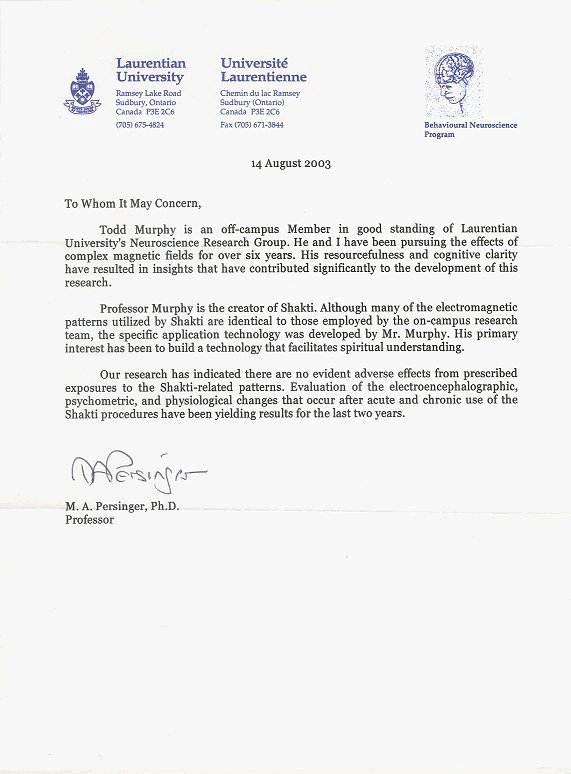 Shakti uses magnetic fields that become stronger and weaker, millisecond to millisecond, mimicking patterns that appear in specific EEG traces. It does not use “electromagnetic emissions”. The electromagnetic radiation that cause concerns with cell phones, power lines, and nuclear technology have nothing to do with Shakti. Shakti produces magnetic fields using simple magnetic coils. The actual output from Shakti is no different from common magnets, except that Shakti’s magnetic fields change their strength constantly, and originate from a magnetic coil. Holding a magnet to your head is safe, and so is Shakti. It does not put electricity into your head, although there are neural stimulation devices that do.

Stereo headphones use magnetic coils, and when you are listening to music with headphones, you are exposing your brain to magnetic fields that change their amplitude (‘volume’) constantly, just as you are during a Shakti session, and in the same range of ‘field strength’ – from 10 to 90 milligauss (mG). Some people do this almost constantly, while others do it for many hours each day – without ill-effects.

A simple point of physics can help to illustrate why the concerns about EM emissions do not apply to Shakti. Electromagnetic radiation consists of photons; individual packets of energy. Electricity consists of electrons, which are also individual units of energy. Fields, like gravitational fields or magnetic fields, are not made of individual units of energy. In fact, they are not energies at all. They can create energy through their interaction with other systems, but they themselves do not have individual “parts”. Rather, they are homogeneous regions that create the potential for energy, which is not the same thing at all.

Many people, confused about basic physics, think that because there is a relationship between electricity and magnetic fields, Shakti’s mechanism must be “electromagnetic emissions”. There is also some confusion that the Shakti coils are “electromagnets”. This only means that Shakti’s magnetic output is driven by electrical input (from your sound card). The magnetic fields that Shakti produces are simple magnetic fields, even though they may rise and fall in complicated patterns. There is no risk of adverse effects from electromagnetic radiation with Shakti because Shakti does not produce it.

There are such things as photons and electrons, but there is no such thing as a “graviton” (for gravitational fields), or a “magneton” (for magnetic fields).

Over 2000 people have experienced this kind of neural stimulation, without any disturbance to the brain. Lab rats have been exposed to these signals (in a laboratory, and not as part of Shakti’s development – Shakti is not tested on Animals) through gestation and into adulthood, without any evidence of lesions, growths, or other tissue damage appearing.

This means that the lab rats had been exposed to the signals while they were still growing in the womb, after birth, and into adulthood, and you can’t test more thoroughly than that. People who are opposed to experimentation with animals will be comforted by the fact that the rats were not harmed, and their brains were only examined after their natural deaths. Indeed, how can you harm anyone or any living thing with a magnet, when we all live constantly bathed in the earth’s magnetic field?

The idea that brain stimulation will lead to brain damage is a piece of ‘media hype’. Several movies have been made showing brain stimulation with bad consequences, but none have been made showing its benefits. Complex (weak) magnetic stimulation, stimulation with MRI, infrared light, TMS, and even electricity have all been found to have worthwhile benefits. Not all of these have been limited to clinical and medical settings. The fear that Shakti might not be safe is not based on any real evidence. The developer of the first generation of this class of technology has issued an open letter about Shakti, attesting to its safety, which you can see here.

Shakti is an example of ‘complex magnetic signal’ neural stimulation, which has been studied in the laboratory. Click here to see some of the research done with this class of technology using the amygdala (“burst-firing”) signal. The study done with the hippocampal signal is here. Another study, with both signals, is here.

Shakti is a powerful technology, and a few simple rules should be observed when using it.

1) Keep to the schedule for doing sessions. Sessions are done every 72 hours or once a week. Do not create your own variations on sessions designs (switching back and forth between signals over the same place, moving coils during sessions unless suggested, or using Shakti signals with electrodes instead of the coils).

2) Do not combine Shakti with other mind machines in real-time. Light and sound devices (that use binaural beats or flashing lights), CES (Cerebral Electrical Stimulation), TENS (transcutaneous [through the skin] electrical nerve stimulation) devices adapted for neural use, common magnets held in place with a headband, and crystals driven by electricity of any kind are only some of the many ‘mind machines’. Minor negative effects have been reported from the simultaneous use of Shakti with other mind machines. However, there is also good news for the users of other mind machines. When they are used about two hours AFTER a Shakti session, their effects can be amplified.

3) Be careful about doing too many mind techniques. Traditional spiritual practice can be deepened by adding more practices (such as yoga, prayer and meditation) to your spiritual life. This is supported by many spiritual traditions. Some monastic traditions will actually fill the entire day with spiritual practices. However, the same does not apply to mind machines. There is a limit to the number of mind machines of any kind that can be combined without ill-effects. Too many, and you can give your mind conflicting instructions. This applies to all mind machines, not just Shakti. Negative effects have occurred in this way. The limit seems to be from three to five devices, depending on the individual. Further study, which may take some time to appear, are needed.

4) Galvanic devices, which rely on creating a flow of electricity through the body, should be avoided when doing Shakti sessions, either as a series of sessions, or as individual sessions. One such example are the “Rods of Ra“. These use copper and zinc rods, filled with several different materials, and held with wet hands, to create a current much like the ones produced by common batteries. When used according to instructions, these (and other similar technologies) will feed current into one side of the body (and with it, the brain). For the “Rods of Ra”, this is the right side, which is the side of the brain where fear and sadness (as well as trance, meditation, meaningful inner imagery and a wide range of other spiritual experiences) appear. Unwanted effects, dominated by right-hemispheric phenomena, may occur.

The Rods of Ra are claimed to be a re-discovered ancient Egyptian technology, while the archeological finds on which the Rods of Ra are based are made of stone. It’s possible that today’s Rods of Ra have a stronger (or different) output than their ancient precursors.

In the USA and Canada, you can order by calling

By calling this number, you’re saying that you understand
and agree to the terms of sale.   Read them before you order.