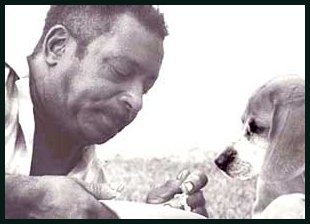 “There is one less hungry dog in the world this day”

Compliments:
“You will be in perfect health, free of pain, with zook and wook, with 18 movie stars caressing your toenails. As you heal, you’ll regain all you lost and have extra to give away. You’ll be organically high, sparkling with health and bs, ts and os (bullshit, tough shit and Other Shit) as I, the Holy One, say. You’ll be high flung and high sprung, and wherever you walk, flowers will bloom, animals will frolic, children will sing and new civilizations will spring up. I am blinded by your light. You shall rise above, and be known as one of the elite – the high and holy ones who illuminate this earth. I rest my case.”

When someone came to Karmu, the first thing he would do was throw so many compliments at them that they would have to smile and forget their pain and troubles for a minute or two. Once that had happened, he said, they were ready for his healing work to begin. People were in states of desperation, despair, and sometimes deep pain when they came to him, and he wanted their energy to be on the rise, so to speak, when he started to work on them.

CAUTION: DO NOT mix potassium permanganate in any higher concentration than one that has the color of dark amethyst (1/8 teaspoon /1 quart [0.95 liters] of water). Doses of 10 grams or so (a very large dose compared to Karmu’s Blue medicine) can lead to poisoning, including fatal toxicity. Potassium permanganate can be a strong acid and can damage tissue if used at too high a concentration.

Potassium permanganate is a legal chemical, and can be found on eBay.

Black medicine is funny: everyone he taught to make it got a slightly different recipe, which changed over the years. When one person first met him, the ingredients were strictly dictated as 1) Cape Aloes (aloe socatrine); 2) ginseng root; 3) gentian root; 4) golden seal root powder; 5) Life Everlasting herb and 6) something he called “kisuvu root”. Put it in a pot, bring it to a boil, and then simmer for 45 minutes. You can boil the same herbs three times, cooking then 10 minutes longer each time.

White medicine – Made from Sudsy Ammonia, camphor, wintergreen, eucalyptus, a dab of mint toothpaste, olive oil. A combination of Ben Gay and sudsy ammonia can be used if no other materials are available. White medicine needs oil, usually olive, although he was seen to dump plenty of Jergen’s Hand Lotion into it too. It also needs a small amount of pure spirits of Gum Turpentine – the real thing, not chemical paint thinner. Later in his life, Karmu used to put small amounts of Blue Medicine, which made the White look kind of murky brown. Any really aromatic oil that was okay for topical use would end up in there at times – such as eucalyptus, thyme oil, or tea tree oil. The recipe for White medicine was fluid, using whatever was around, but always keeping to the same basic formula.

Rub a bit of White medicine between the palms of your hands, and then cup your hands around your mouth. Breath the fumes several times.

Blue Bath – a cup or two of blue medicine in a bathtub with couple of tablespoons of sudsy ammonia. Bathe until the water changes color.

Foot bath – as above, but only your feet.

All of these medicines had Karmu’s energy as one of their ingredients.

Metal Objects – Karmu would keep a box of metal objects under his bed, where they would absorb his energy. He would give these out to people, telling them to keep them on their person. He said that they absorbed his healing energy, which the person would ‘pick up’.

Here is a picture of a medallion once kept under Karmu’s Bed. It Shows Ganesh, the Hindu God of beginnings, and the remover of obstacles. It was consecrated by Karmu in 1988.

Karmu’s Hair – Karmu would give out his hair to people, instructing them to keep it with them, and hold it over ‘the affected part’ from time to time. These hairs from his head were cut in 1988.

Burn Sulfur, Salt, and Alcohol together to remove negative energies.

Place Cloves of Garlic over windows and doors to keep out negative energies.

Back to main page